Remember the Chief from Where in the World Is Carmen Sandiego? The one who would always task you and your fellow gumshoes with finding the warrant and the loot and with all the “Do It A Capella”? Her name was Lynne Thigpen, she starred in the 1973 film version of Godspell — and she plays a sultry, mysterious radio DJ in one of the all-time cult classic films, The Warriors. (All you ever see is her mouth speaking into the mic.)

That 1979 movie is a sort of forerunner to John Carpenter’s dystopian Escape from New York (1984), in which a potential truce among gangs as they attempt to wrest control of the city from the N.Y.P.D goes awry when a leader is shot dead. Framed for the deed, the leader of another gang, the Warriors, is killed in retaliation, and three survivors named Vermin, Cochise, and Rembrandt have to flee by night from a park in the Bronx all the way back to Coney Island as the cops and every other gang is trying to kill them.

Filmed four years after New York declared bankruptcy and the entire city was descending into the gutter, it’s a nightmarish vision of a crime-riddled future that probably delighted a lot of suburban adolescent boys. Widely disparaged upon its release, it’s become a cult classic, best-known for the line, “Waaaaarriors, come out and plaaaay,” delivered — by David Patrick Kelly, who went on to play Jerry Horne in Twin Peaks — while ominously clinking empty beer bottles together. It’s basically a Western, albeit one set very much in the Northeast when every square inch of the subway was covered in graffiti (and the fare was still only 50 cents, payable by token). 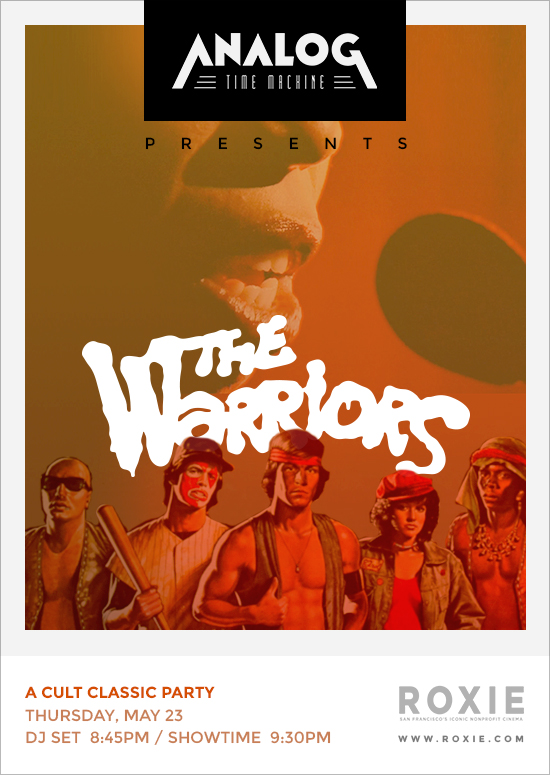 This Thursday, May 23, in collaboration with Everything Ecstatic and Analog Time Machine, the Roxie Theater celebrates the 40th anniversary of The Warriors with a screening of the film preceded by a 45-minute set by DJ Nutzeffekt, paying special attention to music based on and related to the movie. (The Wu-Tang Clan famously quoted it, and “In the City,” the song that Lynne Thigpen plays over the radio at the end, was originally written for the Eagles’ Joe Walsh, oddly enough.) And there’s going to be beer from Local Brewing Co., namely Honey Punches of Oats Pale Ale and Chasing Haze IPA.

Shot by Walter Hill on a paltry $4 million budget and based on a 1965 novel that was in turn based on an ancient Greek tragedy, The Warriors was a success in spite or — because of? — Paramount yanking adds after reports of vandalism and even a few killings at movie theaters. (Presumably rivals from real-life gangs found themselves in the same single-screen movie palaces at the same time.) Is the Roxie taking a huge risk here? Probably some members of the Gramercy Riffs and the Rogues qualify for Social Security, but we’ll see.